THE ROSE AND THE LALE (Tulip) IN TURKEY: THE LOVED ONE AND THE BELOVED

By asqfish May 18, 2018 Allah Islam Turkish muslims Muhammad peace and blessings be upon him Ottoman Empire surah Doha Surah Kausar surah Muzammil the tulip and the rose Turkey

A Calligraphy exhibition at the Aya Sophia with renowned artists from the world, depicting the rose with the name of Muhammad (PBUH)

Inspired by Dr. Zeynep Elif  who showed me the secrets in the petals of the Lale and Rose. Dedicated to all the Turkish people who live the Sunnah knowingly and unknowingly, and who continue to show me their generous hospitality, love and lower the wings of compassion to a traveller in their country. Thank you!

Just as blood flows in a living body, the love for The Loved one and the Beloved flows through the veins of Turkey.

Just as the poppies at the Crusaders Castle in Syria bloom intensely red with the blood spilt in its roots till today, the love for the Loved one and the Beloved resides in the hearts as a balm for those trekking the plains to a safer home after their homes having been bombed

Just as the honeysuckle hangs from the trees and fences along the canal in Augusta Georgia it exudes it sweet fragrance in the heat of a summer day, calling to those passing by to the love for the Loved one and the Beloved

Just as the Jasmine vine grows in the poorest of soil in Karachi offering its sweetfragrance in the evening to the poor and rich alike, the love of The Loved one and the Beloved perfumes the strenuous life of the faithful in Pakistan.

Just as the Sufis all over the world and particularly in Turkey revolve with the love of the Loved One and the Beloved, accepting Grace with one hand raised and letting it pass through their devout bodies to the other hand that is lowered with the wing of compassion and giving.

The ocean of tulips (Lale) at the Emirgan Park Tulip festival

The love affair of the Lale and Rose began when someone brought the bulbs of Lale from the Anatolian region and they took to Istanbul as if they were indigent to its earth. Why did they choose to grow so well in Istanbul?

The Lale (tulips) that grew in Istanbul were unique in shape, their curve and petals folding gracefully and they engraved the name of Allah on themselves. The stem stood up straight in iqamah and then as the sun soaked it with Light it bent its neck in ruku as the dua says:

“May I be in those who do ruku and sujood….”

Did the Lale know that the new rulers of greater Turkey would soak the walls of every building with the resounding recitation of the Quran? Did the Lale know that on the Sultanas island of Uskudar one of the most respected Wali of Allah :Aziz Mahmut Huday would lie buried and would attract the faithful like a magnet?

Did the Lale know that at in the Hadrah of the Sufis: The first name called is Allah with each breath?

There was some thing that the Lale know what others did not……… and I paraphrase from the Quran: ”they are all in tasbeeh and praise of Allah but you recognize it not…..” says Allah Subhanawataala in the Quran talking about everything around us.

Thus the Lale grew and grew and scattered all over turkey never ever changing their shape that declares the name of Allah.

The roses growing in the gardens of the Ottoman rulers noted the name of the Beloved on the Tulips…………….they loved the name of Allah on the Lale and conspired how to get close?

Allah sends salaam to the Prophet……………. The daily salawaat**** floating out of the mosques, the young and old remembering that you had to love the Loved one to become close to the Beloved. Thus began the majestic tradition of remembering RasoolAllah (pbuh) with the salawaat in obedience and in sync with the words of the Divine. 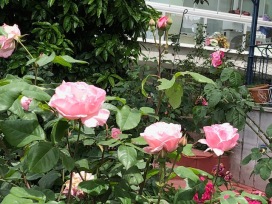 The rose decided to curve its petals, untouched by the hands of plant manipulators or the poisonous fertilizers used in the west. As each bud came out the mother instructed which way to turn and how to open such that the name of Muhammad pbuh would be etched in the shape of the fragrant petals……..

The Lale and the Rose started to be grown together as they both had the beauty and fragrance of the Loved one and the Beloved, and thus begins the story of the close proximity and love between the Lale and roses. This combination of beauty and fragrance forever performing its Dhikr and Salawaat with its entire body inspired the Sultans of the Ottoman empire and the entered the official halls of the Sultans as a sign of the Ottoman Empire demonstrating their love for the Loved One and the Beloved.

Gradually and gently the fragrance and beauty of the Dhikr of Allah and his Nabi entered every home and every heart in Greater Turkey. To accommodate the growing love for Rasoollah (pbuh) and the submission to Allah the Turkish Sultans started to build what are now considered architectural wonders, which have survived many centuries. These  Mosques, Dergahs and Tekkes which went up at the shores of the Bosphorus are sentinels of the expression of the Love and Remembrance of Allah and His Prophet (pbuh)  All with the same intention: to get close to the Beloved with the fragrance of the Loved one……..

The connection between the Loved one and the Beloved is unique: In the Quran Allah commands RasoolAllah (pbuh) to STAND ! (Qum) in the face of oppression and he (pbuh) obeys, Allah commands him to build inner strength by connecting with Him Subhanawataala in the last third of the night when all living things are in slumber and the channels of communication are wide open and he (pbuh) obeys. (Surah Muzzamil)

It is in the last third of the night that the highways to Grace are uncluttered with the distractions of food, people, and love of material goods, when thoughts and anxieties have been laid to rest with the sleep of the first two thirds of the night. It is then that the Loved One requests conversation and The Beloved responds… the requester stands in full submission in perfect etiquette of obedience and humility and the Beloved responds with full attentiveness.

In his (pbuh) times of grief and disappointment at the lack of response to his (pbuh) efforts at the non acceptance of the message of Love, Allah reassures him……….and reminds him and I paraphrase from the Quran: “did He (Subhanawataala) not rescue you (pbuh) from when you (pbuh)  was left defenseless as an orphan? (Surah Doha**) and gave you (pbuh) a safe and loving home?”

The Beloved does not want to see the Loved one sad at being unable to convince his blood relations and sends a message of comfort with Gabriel (AS):  to “convey not convince” (surah Baqara). Allah offers Himself to take on the worries, anxieties and disappointments of the gentle Prophet (pbuh) not being able to convince the people that he (pbuh) loves.

It makes him (pbuh)  sad that they do not understand that it is with the obedience to the Creator that will pave the way to live in the Gardens eternally.  He drags them away as they proceed towards the FIRE, and yet they want to return to it again and again.

Allah sends comfort to the Prophet and all those who will follow with the prescription of Surah al Inshirah,

He sends solace to all those who have lost their sons and heirs like the Prophet and stand alone in front of him:  He sends a short and sweet surah (surah al Kausar) such that the tears of the bereaved  never blur the message from reaching them and  providing  comfort for all times……

Thus the Lale and the Rose came together in Turkey not by accident……… but as a gift of the Divine to the Devout and Obedient.

One thought on “THE ROSE AND THE LALE (Tulip) IN TURKEY: THE LOVED ONE AND THE BELOVED”