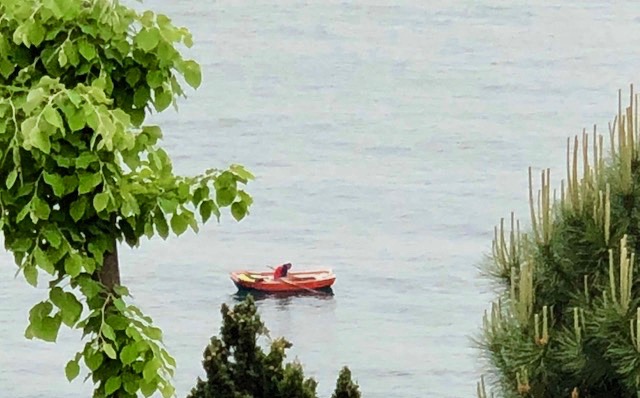 A man fishes in the Bosphorus on a quiet sunday morning

It is Sunday morning in Uskudar. I have a severe bout of bronchitis, which has made me homebound. I think it is the Divine plan to redirect me to actually look, feel and discover the untold secrets of the changing light on the Bosphorus. 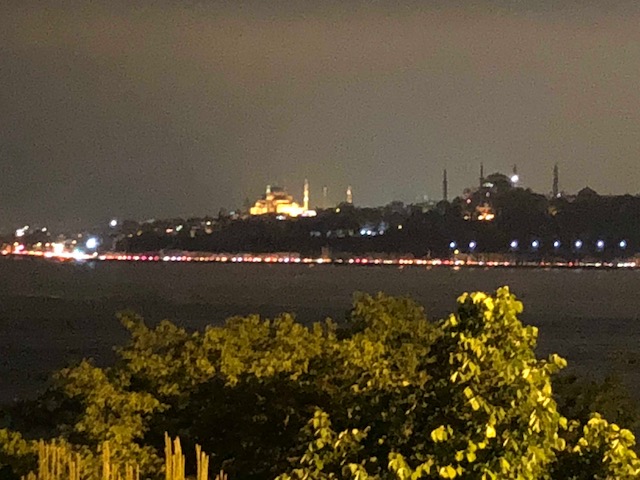 Last night I saw the entire coastline of the European Istanbul in a locked in traffic jam.  The cars were not moving at all in one direction i.e. towards the rest of Istanbul and it stayed like that into the wee hours of the night.  I thanked God that I did not have to commute or like some young folks go partying in Besiktas and then be caught in this endless highway traffic jam while trying to return home by car. I am grateful for the Marmaray (subway) that even though not picturesque goes under water and underground and delivers one to ones destination in minutes without the hassle of the traffic jam. It was not so when I visited twenty years ago.

This morning I come out on the balcony to try a simple peasant Turkish breakfast. As I look out over into the quiet waters of the Bosphorus a dive away from my apartment is a man fishing in a small row boat, the gulls circle him but leave soon to go elsewhere. The calm of the morning is in his demeanor and his unhurriedness. The business of the day has not yet begun. Soon enough the ferryboat obediently carries it load of cars to the European coast and back. 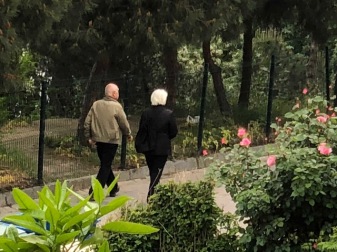 In the small lane off my apartment an Ataturkian couple dressed in western clothes is on their way somewhere. Looking at them I could easily be in New York. 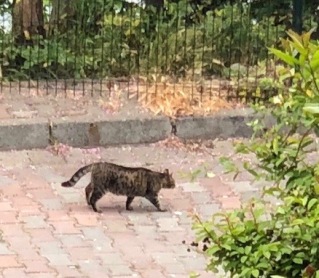 The gentle sprinkling of rain washes the roses and sends the cats scuttling under cover. A woman heavily covered in black her abaya flowing in the soft breeze, accompanied by a young woman in trousers and a T-shirt; pass by hurrying to be somewhere. Perhaps a morning halaqa? Or they may be returning after a beautiful morning Dhikr at Aziz Mahmut Hudays mosque down the street.

The cars parked in the street sit quietly and heave a sigh of relief. It is Sunday and they get to rest from the hectic week of work, negotiating the curvy hilly streets of Uskudar and sometimes driving onto the ferry and fighting the traffic on the European side of Istanbul, watching out for clueless jaywalking western tourists. The tourist is busy looking up at the magnificent spires of the mosques, which unlike the empty but famous churches in Europe are filled with worshipers at the time of prayers. 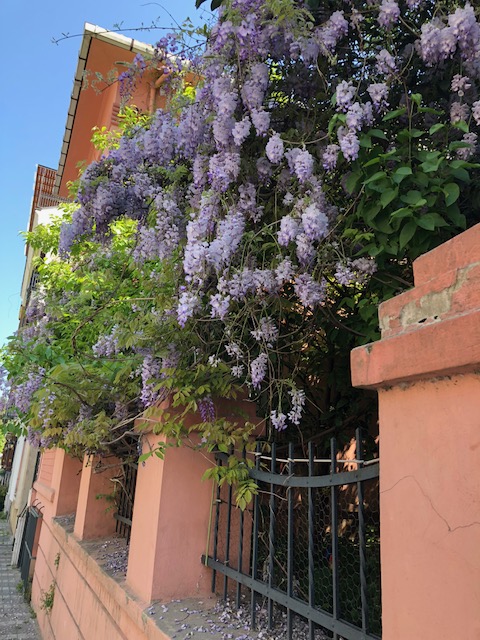 The cool of the morning is reminiscent of early spring, yet the wisteria have had their hey day and the vines are greening The pink blooms of the pears are starting to call for the curving into fruit, and so life goes on, in all its full beauty and splendor.

The Symbols of spiritual piety and clarity ( The blue mosque, Aya Sophia and Yeni mosque) made with the Love and Fear (Taqwa) of Allah stand as testament to the benediction from their Lord.

Ataturk with his back to the wall in The world war One negotiated a deal with the cruel western powers in which he exchanged the face of the Ottoman kingdom for a secular western Turkey, thereby saving the marauders from doing to Turkey what they have done to other historic Islamic places like Iraq and Syria where the dust of the Awliya mixes with the toxic plutonium of the exploded bombs. Where the mosques lie in ashes and worshippers who once prayed in these mosques of which only shards of concrete and plaster are left after the bombing are trekking to unknown lands with nothing but their bodies and sometimes their kin.

These men, women and children who lived a decent life of tradition are now on a trek to anywhere to find food shelter and clothing……….. The basics.

Reports indicate that 54 million people across the world have been bombed out of their homes and are on the streets, paths and the waters of the Mediterranean and the Atlantic. Smugglers of human flesh ( see the movie below) with hearts as hard as rock are having a hey day.

The most demeaning existence of any human being possible has been meted out by the bombing jets to the children of these previously well to do families.

They are now begging on the streets of neighboring countries while westerners place barbed wires and border police to shoot at them if they try to tread into their land.

These wide eyed innocent children are fast being divested of their innocence again by the human predators on the way and are living from moment to moment on morsels given by strangers. They live in a suspended world where there is only the present, no future, and a past that is fast becoming erased by the anguish of the present.

Worst of all are the girls: beautiful innocent Syrian girls, I am told in Lebanon being sold ……… One reporter once wrote that he bought eleven children for One dollar to save them from the predators but now in his tiny apartment could not find a western agency from where he was to find them a home. Rich western countries have placed a moratorium on accepting refugees.

It would be more meaningful if they stopped bombing and stopped making more refugees.

I go to the little mosque for prayers and there I find a plea and reminder ” Dont your brothers /sisters have a right over you? “and my eyes fill with tears and blurs the poster so that all I can see is the children……………

I stand in the tiny foyer of the mosque next door and realize this is the Jalal of Allah and I have to follow the instruction in the first line of Surah Al Ala’a…….. and wait for His Jamal. 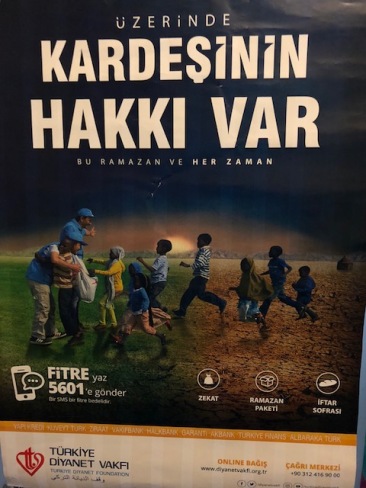 Turkey has accepted and continues to accept and absorb millions of refugees, with 900,000 of them (Helping Hands estimate) being unaccompanied children which are being served by Turkey with the helps of soft hearts. May Allah accept their good deeds and give them more.

I thank God for the wisdom of Ataturk; I thank God for the rejuvenation and restoration of the mosques and places of worship all over Turkey occurring as we speak, and most of all for the love and meticulousness with which the architects of the Ottomans constructed these monuments which provide beauty to the eyes and peace and comfort to the soul for everyone.

May Allah protect Turkey from the forces of ill intent and evil. May the people who pray in these houses of Allah always be blessed with His Protection AL- Hafeez. May the hearts that take care of the “unaccompanied minors” always be Godfearing, pure and compassionate, and may we be forgiven for our apathy across the Atlantic.

I look up from my musings about the world and see the ferries ploughing through the waters of the Bosphorus and delivering their amanah punctually and without complaint.

I look further and note the the six spires of the minarets of the Blue mosque reaching up for the embrace of the Divine asking for His Love untiringly for centuries………………. 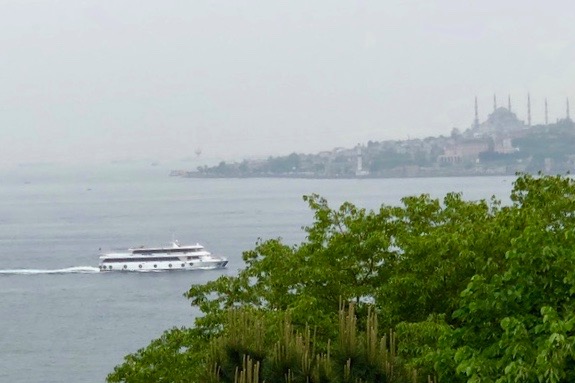 As long as people will yearn to pray Allah will provide them with beautiful mosques…..