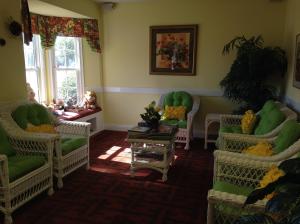 He had died suddenly and we were not supposed to let our mother know that he had died as she was recovering from a cardiac setback. The consensus of my brothers before they left for Pakistan was that we needed to tell her over the period of perhaps two days, gently easing in with an illness, ICU admission, a deteriorating condition and then death. May Allah forgive us all for the lie we told our mother, and tortured ourselves with withheld grief.

Two days and many days after that the floral seats of my waiting room settee held me, in its arms after work and on the weekend as I cried for my brilliant gentle brother. He had left us with no warning and no reason. I would sometimes sit in the empty office after the patients and staffs had left and cry openly and those two days seemed like two years. Sometimes I would find myself keening for my gentle brother, sometimes talking aloud to Allah asking him for some explanation, some reason and some comfort and sabr. This was something I could not do at home as according to the information given to my mother by the consensus of my brothers who had left for the funeral in Pakistan, my dead brother in Pakistan was slowly dying but not dead. Thus the intense grief that was overwhelming me could not be expressed while there is still hope in his surviving.

“ Maybe if he had stayed on in the States he could have gotten heart treatment here,” said my mother doubling my grief. “And now he is in the ICU” my mother would wonder “ How is he? “ she would ask and I was mute with unexpressed grief.

Sitting on the white wicker settee for which I had paid an arm and a leg and had drawn much criticism from professionals and waiting room experts I would weep for him. The consensus of classic office decor folks was that it looked more like a settee to relax in the garden rather than a waiting room seat. I agreed with them, and I told them that my waiting room was a garden for my pediatric patients and their parents.

Sitting in the waiting room even when filled with grief, I felt I was in a sanctuary surrounded by beauty and serenity.

I had derived much pleasure by making my waiting room into a garden, hanging paintings of flowers, a metal sculptured lady bug mom followed by her babies adorned the wall and fascinated almost every child. Some asked if they could take one of the baby ladybugs home. “ But what will the Mama do? Won’t she miss her baby?” I would say and that would quell the desire to own what is beautiful.

A wall fountain centered in the arch, made music whose muted sound quieted even the most hyperactive children who spent time in the waiting room.

Through my tears I distinctly remember looking up at the beautifully folded drape over the bay window finding great comfort in the predictability and stability of the precise folds which emanated beauty, calm and life, at a time when a life close to me had been snuffed.

How can drapes speak to you unless you are a schizophrenic? How is an office a sanctuary?

Many physicians hide in their offices burying their sorrows in the hordes of patient files while creating an impression of working late and gaining accolades from colleagues, friends and acquaintances alike for such dedication.

What no one knows is that their office is a sanctuary for them. They love being amongst the positive energy of all the patients whom they love with compassion and caring and those that love them back equally and unconditionally.

My sanctuary had my stamp on it. I had chosen how to lay it out, how to furnish it on a shoestring and how to look out for bargains to bring the ambience I wanted.

The waiting room with glossy magazines mostly of gardens and flowers and preventive health were interspersed with serious current information on childhood epilepsy and migraine. I had even developed a three ring binder prior to Internet to bring the latest research to my patients.

I had steadily resisted all attempts of drug and commercial companies to install a free TV in the waiting room. I can say that in the almost 18 years that my office has come of age, no child ever asked for it.

The children played with the train set, spending quiet time with connecting the train tracks and making the train set work. They read my children’s books and played with my children’s toys and listened to the soft sounds of the water from the fountain. The bargain I made with them was that if they put the toys back in the large drawers provided, they got a gift from the treasure box. They almost always did do that and won a favor from the treasure box. The treasure box was a winner and the creativity of shopping for it was also fun.

Entering the office from the main door on a bright Monday morning, flanked by sweet smelling rosemary with periwinkle blue blooms always ushered me in with fresh positive energy. I would pause at the threshold before opening the door and shrug of the imaginary cloak of stressors of home and the outside world before I entered the quiet cool of the garden waiting room.

I remember sitting at the small bistro table next to the wall fountain flanked by the topiaries and thinking how lovely it would be to serve tea for two and enjoy a chat with a child. Such leisure was a luxury that just remained as a “to do” memory never to be realized as the rush to see the patients and set them on their way always got in the way.

At one point a nasty person wrote negative stuff on my online persona the reason was she was asking for an illegal action, and I would not conform, so she took it out on me online. In addition she said my waiting room was dirty and unkempt. I was incensed as I prided myself in the immaculate cleanliness and beauty of the garden atmosphere of the waiting room.

I went and sat on the floral cushions of my wicker set to test them and they had flattened out a bit but were neither dirty nor unkempt, However her words stuck in my head and I replaced them with fresh spring green cushions, and a Georgia red clay colored carpet which refreshed my furniture. The waiting room now reflected the hues of nature with the red clay of Georgia as the floor and the verdant green cushions on the settee and wicker chairs transported the room into a civilized forest.

At Christmas and holidays the staff and I would thread lights in the greenery in and around the waiting room, giving it a magical fairy garden look.

I have loved every day of entering my garden waiting room; pausing at the threshold waiting for a calm serenity to embrace me before the days work begins.

As I proceed to close my practice and embark on a new life, I know that I will miss my office sanctuary, which to me is almost like a living thing, especially the garden waiting room that has held the hopes and optimism of many a parent in getting their child the healing they needed.

Places have a container effect. They hold your sentiments and embody your passion. In moments when you are out of sync with yourself they give you back the positive energy that rights what is wrong in your inner world, at least for now.

The garden waiting room with the soft sounds of the fountain did just that.

Please keep me in your prayers.

4 thoughts on “DOCTORS DIARIES: THE SANCTUARY: THE GARDEN WAITING ROOM”