My Dilemma: Live by the Ocean or learn how do Rhino’s pray?

I have lived a large part of my life in a land locked city. Even though it has a lake with 150 miles of coastline I usually see it twice a year. I do live on a pond, which is eye candy since it belongs to someone else.

Several times a year I escape to an island where the birds live, the Alligators bask in the sun and the people spend their time playing golf.

In the past when I was asked if I would like to retire there, I had said, an emphatic NO! What would I do on an island where all you did was play golf?

Well the tsunami of life slapped the old ideas out of my head and polished my insides to accept my own company in my Lord’s presence as the best. All else in essence became temporary and superfluous,

I am walking on the beach on my favorite island, it has been preceded by a ten day week filled with stressors that I have dealt with competently in my opinion; however my persistent headache does not go away. Somewhere hidden deep in my psyche is a nagging worry or anxiety that refuses to surface and yet continues to knock at the door to be let out.

“Walk barefoot on the sand” my spiritual friend texts me, “the Universe will tell you what you need to do”.

I am walking barefoot on the sand on the pristine far side of the island where not many people go. There has been a storm and unusual shaped polished pieces of driftwood lie on the sand like undiscovered jewels. Interspersed between them are orange and mother of pearl shells, which once housed tenants who are long gone. 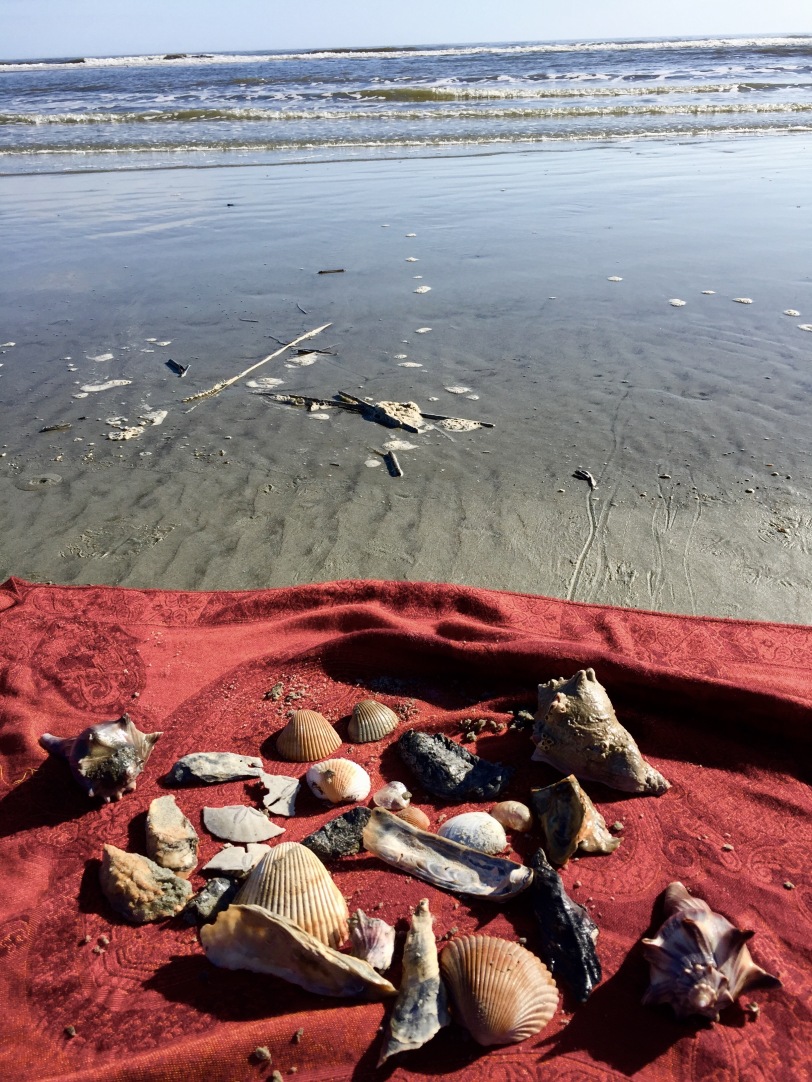 As I continue my walk my feet feel the sand, the shells and the up and down of the squelchy wet sand at times, I have an epiphany… I must live by the ocean, where I can walk on the sand barefoot every afternoon, write every morning and commune with my Creator undisturbed. I return and start my search for a cottage on the ocean, small and safe. Easier said then done!

What happens next is an expression of “ Be careful of what you ask for as you may get what you wish”.

Vague possibilities of living on the ocean start to morph into real possibilities. Then comes the hard part, giving up the life I have lived for thirty-two years and more specifically for the last three years…

I have returned from the island and visiting my daughters home. I am outside at their home playing Nano Rhino and big boy Rhino with my three-year-old grandson. The game is entirely of his making, I am a cooperative player. Asr is long past and the shadows of the night are showing their fingers as the sun says good-bye by lighting the leaves to gold.

Big boy Rhino followed by his Nano Rhino does everything from chasing panthers to resting on his side so as not to poke his tusk into something inadvertently.

We reach a grassy knoll and the last of the sunrays play through the leaves. I stop and say “It is going to be Maghreb soon and the rhino has to pray Salah”

He stops in his tracks eyes shining, “show me Nano, show me how does the rhino pray”

I hustle over to him trying to imagine how a several ton rhino with a horn between his eyes does sajdah?

“May be when its Maghreb I will show you” I stall.

“Lets do it now Nano” he says aligning himself in the iqama position and facing the house. “Allah ho Akbar” I say and he goes into ruku. “ The rhino can’t do sajda because of his horn so he has to pray standing” I explain. May Allah forgive me for making up the Rhino’s Salah on the run.

“But he does do this” I say and do the salutation (tasleem) on both sides and Salah ends. The big boy rhino takes off in a run, his eyes bright and laughing filled with unrealized dreams weaving his way along the path to the side of the house chasing panthers and calling his Nano rhino to follow him……

How do I answer the call to the ocean when the big boy rhino awaits me to show him how the rhino prays and plays and wants to be followed by his Nano Rhino?

2 thoughts on “My Dilemma: Live by the Ocean or learn how do Rhino’s pray?”