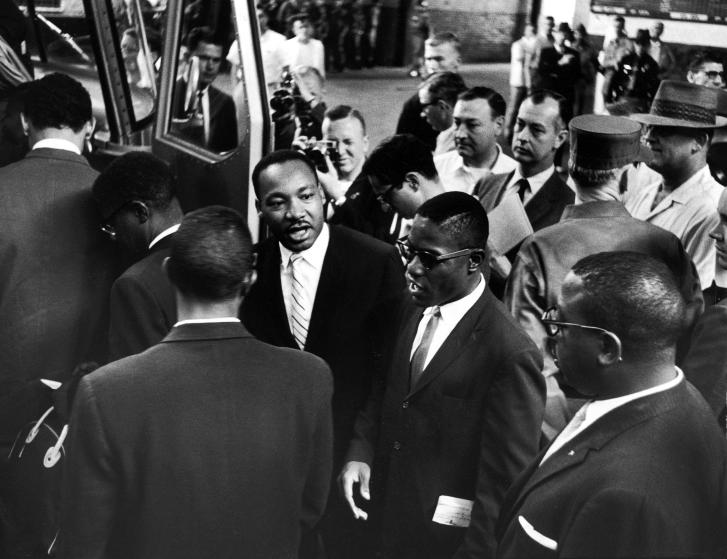 In the heart of the Deep South is a small town that holds in its cup of peace 24 Muslim cultures, multiple ethnicities, color and many people of different faiths.

Nine years ago the leaders in the local faiths decided to come together to provide a venue of respect and value to celebrate and learn about each other’s faith. At first it was small and only the small churches and a reformed synagogue participated.

With the spread of racism and anti Muslim rants about violence against American Muslims, the family of local faiths has linked arms in a circle around our little town to protect honor and provide sanctuary to those who live within its domain, irrespective of caste, color and creed.

Last night was a brave and outspoken event organized by this group and hosted with Grace and elegance by one the oldest Presbyterian churches in the area.

As I sat listening to the talk on the celebration of Martin Luther King about “Getting to luminous darkness”, by Rev Veronica Goines, I wondered if the congregation of the speaker had the same challenges as the Muslims, where the rich and the influential rule and the poor and the middle class has its mouth taped shut through the pressure of subtle oppression.

As the Davidson Chorale sang about peace and guidance, I wondered about the hundreds of hours they must have spent to get to this level of excellence where 70 voices sang as one, where they obeyed the maestro without a catch in the change of tenor and where they happily sang their part or stood in the place they were given happily and with responsibility. I wondered if they fought with each other to stand in the front and if they tried to bribe the maestro to give them a more visual spot or a more leading role?

I wondered if the young adults in our mosque had that kind of discipline and dedication that they would practice for three hours each day and then sometimes on the weekend could they present their work flawlessly and in unison?

I wondered what drove the Davidson chorale students, and what did not drive our young adults to excel in the practice of their faith and discipline themselves with their peers to work like a vocal symphony.

As I sat and listened to the leaders of the faith groups speak one by one of the Peace they wanted, some spoke and some sang their message. I wondered why the beauty of the Quran did not ring through the hall of this esteemed Church, as had the Buddhist and Hindu chanting.

As the speaker renowned in her fame spoke of “luminous darkness” that one sees at the bottom of the ocean, I wondered how many in the audience could relate to that? Having done scuba diving I could relate how you feel when you encounter the first layer of darkness and how if you can overcome that very physical fear of being harmed by the unknown forces in the depth of the ocean, you are then witness to the beauty of the luminous darkness and its mysteries.

How many of her listeners who heard her say “black lives matter” would go home and listen and agree with Trump who has become the flag bearer of racism and intercultural, international hate.

As one of the speakers lamented at the injustice against women and girls I recalled my conversation from a pregnant female physician on the faculty of the local Medical School. She informed me that she was accruing sick leave and vacation to have time off to spend and nurture her baby after birth. I was thrown back to 30 years, it was the same issue and I was shocked that nothing had changed despite my attempts 30 years ago to change attitudes at the same medical school. Thirty years and no progress in recognizing and respecting motherhood in a profession that makes it money on the backs of pregnant mothers and their children.

I listened to the instrumental music, which soothed the frayed ends of my neurons and lulled me into a false sense of peace. I did not want it to stop for I wanted to remain in a cocoon, and yet I wanted it to stop because life lurked in the shadows with all its horrors of millions of refugees from the Muslim world scattered across the globe like tattered plastic bags that no one and nothing wanted to absorb.

One of the pastors spoke of peace………..and I wondered if it was his congregation that had passed the bill to drop 23144 bombs on Muslim majority countries in 2015 alone.

There was a huge divide in what was being said and what was being practiced. Could it be that the congregation of each of these ministers did not heed the words that their pastors and religious leaders were speaking?

The lovely elegant African American Buddhist pastor chanted peace and the crowd attempted to follow. I wondered about Dalai Lama and his followers whether they have any say over the rabid Buddhist priests in Myanmar (Burma) that were leading their people to massacre Muslims and anyone who looked like them. There seems to be no reigning in by any one within or out of that country.

Overall I was thankful that at least one day in a year a black women was allowed to speak in a white church about “Black Lives matter” at least once in a year the men and women leaders of the faiths represented in our little town stood together to speak of freedom and peace with one voice.

Despite the background questions going on in my head, I was grateful… For the remembrance of a man who had the guts to stand in public and say the unthinkable: “ I have a dream………………….” Knowing full well that he had received a serious enough threat that these may be the last words out of his mouth.

I also remembered that each raindrop could make a difference in the level of a lake the depth of water in a river and in saving a life dying of thirst.

Such was the program last night of the interfaith alliance in our small town in the Deep South.

I looked at the faces of the people ……………and I agreed with the speaker that it was the kingdom of the Lord Almighty that was represented there, with people of every hue and color in the audience and at the podium. Gratitude flooded me……..