MY FATHER AND THE INTERNATIONAL COLLEGE OF SURGEONS 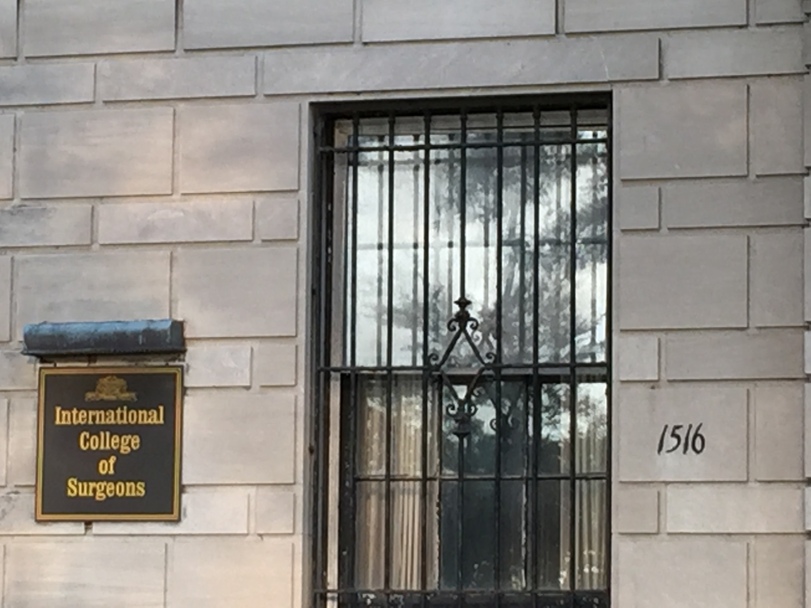 It is fajr in Chicago and as the gentle light of dawn lights up the top few stories of the high rise overlooking the lake I see it spread like liquid silver over the Lake. I have an intense desire to be out there looking at the sunrise over the lake and yet there is an age old cultural hesitancy to walk out alone. Will the apartment alarm go off if I step out and not only awaken my hosts but all of the building occupants on this beautiful but early Saturday morning? Chicago is the den of muggers especially along the Lake Shore? Am I convinced of the erroneous sensationalist news regarding the “big bad city”?

I decide to wake up the youngest person in the house to enquire about the alarm and then walk out. She says “no alarm” and promptly falls asleep again.

I walk out into the fresh morning air, and as I round the bend to the opposite sidewalk from the Lake I come upon this building that stops me in my tracks.

Weathered sandstone in large blocks look out at me with years of history embedded in its bones.  Facing the lake, it has witnessed change as the character of the Lake and the surroundings evolved with need and greed.

The mind, brain and heart are interconnected with the memory of the eye, ear and smell, which can evoke a memory intact with all five senses.

Though I stand in front of the house with the plaque that reads “ The International College of Surgeons”, I am transported to another time and place.

I am in his spacious elegantly furnished living room. His books are consolidated into two flat bookcases closed with glass doors that open outwards to reveal the entire contents. In the corner is a revolving bookshelf. It is an old antique cherry, a throwback from the Victorian times. It is filled to the brim with books, all of whom I have read over the years as a growing teenager and as a young medical student.

I look out of the French doors, and see that his petunias have been scorched by the unrelenting Karachi sun and perhaps due to a real dearth of water even in this affluent part of the city. Perhaps his gnarled hands could no longer water them consistently?

As I finger the books that were my friends in the long summers, I am reminded why I am here and what I am supposed to be doing. The horror and grief has to be blocked actively with both hands in order for me to get on with my task.

I am here because my aging father has been murdered or has fallen accidentally that has ended with his demise. The details of which I will deal elsewhere if time and sensitivity permits.

I return to the first bookcase with the glass doors, and open it. A scroll rolls out of the bottom shelf. I pick it up and unfurl it. The caption in beautiful calligraphy declares “ Degree from The international College of Surgeons “ It goes on to decree a postdoctoral degree on my father and commend him for the excellence of his work.

My father was the editor of an internationally acclaimed, first ever published medical research journal of Pakistan. In medical school I had gleaned that fact. Though he never cared to network or kiss the asses of the politicians of that time that controlled the medical school his fame in the arena of ethical real research had leaked into all academic halls. His publications were at the cutting edge of medicine, and were well recognized though sometimes grudgingly by all in the field of academia.

How famous or respected was he? This was not really something he bragged about nor did I delve into it as a young medical student. For me it was more important to define his role as father than any other role he played in the world of medicine.

I look around the spacious living room, the worn spot on the sofa where he sat and watched TV, the heavy lined drapes that kept out the evening sun from bleaching everything in the sitting room were drawn back.

My mind in its two tracks was grappling with the fact that he was dead, buried and no longer accessible to my son who had never seen him. We did not know what happened as he lived alone when it did. Since all of his children except one had moved abroad and the one son left behind had been away on business when this happened. The events leading to his death were and remain a mystery.

More scrolls tip out of the bottom of the bookcase as if the large scroll of the International College of  Surgeons had started a cascade by exiting the confines of the bookcase. I pick them up one by one and as I unfurl them, an image of my father as a famous researcher and writer unveils. It is an image that I am aware of in my subconscious mind but have never paid heed to nor did he impress his academic status or fame on any of us.

One after another I read certificates of excellence in Research, in Medicine, in Ob Gyn, in ethics, in being a pioneer in putting Pakistan on the map of the Medical Research Publications. I stand in the forlorn living room where his humble presence hovers without burdening the atmosphere.

The certificates and accolades speak to me of a side of my father that I never knew.

His impeccable scholarship both in writing, reviewing and publishing medical research was an unknown area to me even as a budding researcher and scientist. I was working long hours in an American Medical School where I was neither valued nor respected as a woman. I was and am a foreign medical graduate and a person of color.

I had risen beyond my immediate superiors and colleagues, and had published a book, several chapters and scores of articles but it was not enough for the ruling academic powers, they wanted more, they wanted all of me.

I again open the endowed degree of excellence given to my father for the dedication and pioneer work in research from the International College of Surgeons and stare at it. Would my children be unscrolling such a compliment from my academia that I had carelessly tossed in the bottom of a bookshelf, and will they wonder where the years had gone?

This was a turning point in my perspective of the blind search for excellence that I had been seeking which seemed to have no boundaries and no end point.

Allah Subhanawataala was signaling to me in my father’s living room, scroll in hand that I must change the allocation of time. I must reallocate what I give of my time to the greedy unforgiving avaricious world of academia and turn the larger block of it to my children. It was a challenging prospect for someone who was at the pinnacle of academic fame in the first world of Medicine.

It took me three years to accomplish it but I did. The reallocation of my priorities allowed me to be with my children, after school, and accompanying them to their gifted class trips. One of which was to the famous Okeefeenokee swamp where the Alligators swam up to your flat bottom boat and nosed its edge, their beady eyes assessing your delectability.

Tariq drew the scene, which hangs in his room as a reminder of that time captured in the colors that have faded with time. However memories are cherished time capsules that stay with you, forever soothing your heart and easing the irrevocable parting.

It was one of the best decisions I made in my life: giving up my fame when I was at its zenith. I had no clue that the years with Tariq were numbered and were finite and that I would never have the luxury of “later”.

I thought of my father spending those long summer evenings in his living room alone, while I toiled on the ladder of academic success, rarely calling him, many times missing him. Accepting speaking engagements to the Fareast so I could stop and visit him and my remaining sibling albeit for 3 days only.

I am still rooted in front of the building of the college of International surgeons in Chicago as the sun rises on the lake. 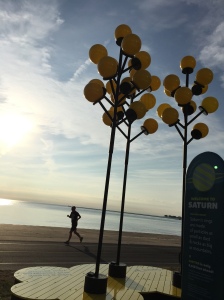 The Lakeshore pavement fills with determined joggers. On close scrutiny I realize that the building with the sign of the International College of Surgeons is a museum, which opens when I will be long gone from Chicago.

I wonder at the emotional blackmail of the western academia that lures the intelligentsia of the third world to give it all: their life blood, their family time, their energies and innovative ideas and their youth.

In return they award them a piece of paper whose significance is apparent by its relegation to the bottom of a shelf of a seldom used cabinet.

I am back in the living room which holds his imprint vividly. The long drapes move gently with the evening breeze from the Arabian Sea. What were his thoughts when he tossed this piece of paper, a certificate that held the accolades and fame of his profession to the bottom of the bookcase?

Did he sit on that sofa In the waning light of the evening where the threads have worn out indicating his favorite seat and ache with loneliness? Did he pine for his children and yearned to hold his grandchildren on his knee?

Would his eyes light up as he would point to a visitor, the river of petunias that he planted, ablaze with color, defying the Karachi heat, spilling over the marble edge of the flower bed, bringing beauty, life and color to the desert sands of Karachi?

Know that the life of this world is only play and amusement, pomp and mutual boasting among you, and rivalry in respect of wealth and children. (It is) as the likeness of vegetation after rain, thereof the growth is pleasing to the tiller; afterwards it dries up and you see it turning yellow; then it becomes straw. But in the Hereafter (there is) a severe torment (for the disbelievers – evil-doers), and (there is) Forgiveness from Allah and (His) Good Pleasure (for the believers – good-doers). And the life of this world is only a deceiving enjoyment.

7 thoughts on “MY FATHER AND THE INTERNATIONAL COLLEGE OF SURGEONS”