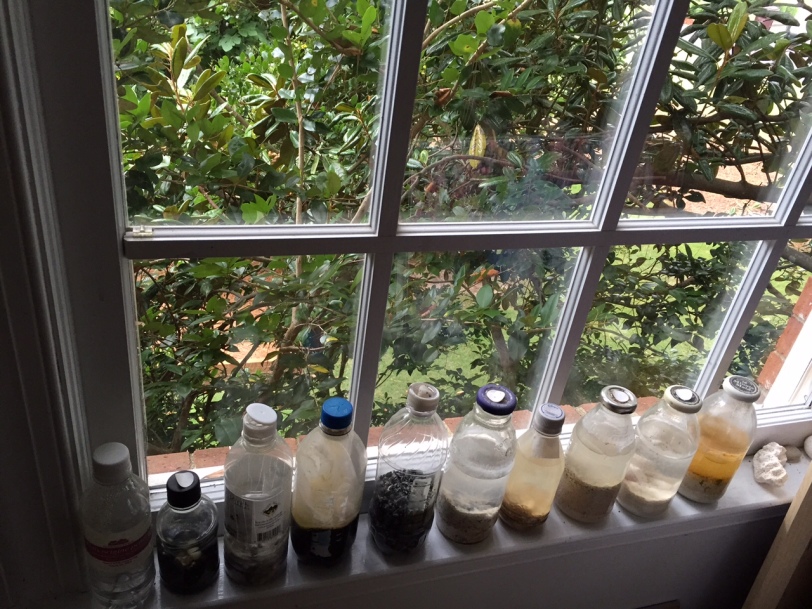 I walk into Tariq’s room and on his windowsill stand ten bottles. Nine are his and the tenth is mine.

I think back to one of the times where he filled his bottle and brought it home:

We are in Alaska; the beach is strewn with black stones, which stand out dramatically on the white sand. At close quarters the larger stones have white stripes on them, but the smaller black stones scrubbed by the ocean are like polished ebony. “Mom do you have a bottle?” he asks. I give him my water bottle. He empties it and fills it with the water, sand and stones from the beach. I watch him thinking “what a unique souvenir”

Tariq and I travelled to nineteen countries together, and no we do not have bottles from each ocean or body of water we visited. The US customs even prior to 911 was wary of bringing anything-resembling food or drink into the country. How we got some in from Belize, Cancun, Costa Rica and Cozumel is beyond me.

At the Grand Tetons there is a mountain stream, clear, freezing cold in the middle of spring. Its water with some grains of sand and pebbles in a glass bottle of minute maid juice also stands in the window holding vigil for many years.

Tariq grew up and our travels together stopped the year he went away to college. The night he was killed was the night before we were leaving for Belize yet to fill another bottle perhaps. His backpack was filled with travel stuff, his sneakers and his soccer shoes, which he wanted to give to a boy in Belize packed and ready. His own soccer shoes a bright orange sitting beside the backpack as he planned to play soccer with the Belizean kids this time instead of just being a spectator.

We went to Belize the year after he died and I gave his much-cherished orange soccer shoes to one of the kids in the soccer field. “How much? “ he asked his eyes at first lighting up and then saddening realizing there was no way he could afford them. In one glance knew the true worth of those shoes.          “ A gift for you, from my son” I said. “Thank you Senora!” He said his eyes filling with pure unvarnished youthful joy, “say thank you to your son too Senora, is he here? On the island?” I hesitated…”No” I said simply and left. I never turned to see if he put them on and played. During that week I would pass by the soccer field on my way to the market but avoided watching the field for a player with orange shoes, as my vision was always blurry with tears.

On July 13 it will be ten years since I parted irrevocable from Tariq.

“The Moving Finger writes; and, having writ,
Moves on: nor all thy Piety nor Wit
Shall lure it back to cancel half a Line,
Nor all thy Tears wash out a Word of it.”
— Omar Khayyám

N, Imran’s sister said she wanted to do something special on this tenth milestone, something to remember how the three boys were: happy, sunny spirited, good friends, positive and ebullient about life.

Tariq was somewhat irreverent with a deep sense of spirituality a strange duo in one body. His indescribable though very characteristic laugh when he heard something absurd or unbelievable still rings in my ears at times.

I asked Shireen and Paul if either of them wanted the bottles. Some had expanded and their plastic tops had cracked with the extreme southern heat from the window. They said “ No” and to “toss them” respectively.

My friend A introduced me to the centuries old tradition of letting go of your sorrow, grief and sad memories in a physical ritual.

An African woman in Scotland at the “Forgiveness conference” at Findhorn taught us how to let go of grief and embrace forgiveness………in a physical ritual. It was potent and unforgettable.

When I mentioned to J a dear friend that neither Shireen nor Paul want the bottles and I do not have the heart to put them in the trash, she suggested emptying the bottles into a stream and giving them back to the sea.

Reading Imam Ghazalis book titled “Alchemy of happiness” I am propelled to take action to detach from things and to store my memories in my heart and brain rather than in objects. I am starting with the bottles and see how my memory storage does.

This is the month of Ramadan and it brings me the milestones of two personal losses and one gift (awaited).

I want to give back to the sea its amanah (trust)……… The Savannah River calls me to empty these bottles into its fast moving currents, whence they will be whisked from the heated waters of the south carrying them to the ocean and then on to where they belonged perhaps.

The Savannah river is described by the New Georgia Encyclopedia as such: “From its beginning as a clear, cool, free-flowing stream in the Blue Ridge Mountains to its end as a coastal estuary, the Savannah River and its tributaries sustain some of the world’s most diverse and biologically rich ecosystems. The Nature Conservancy of Georgia describes the Savannah River basin’s abundant diversity of life as rivaling that of a South American rain forest.”

The Savannah River has witnessed Shireen and Tariq walking, picnicking, and bicycling by its shores first with family and then on their own with their friends. Its rugged rocks surreptitiously covered by the waters after a rain baring themselves at times to non-southern visitors as a surprise. Its banks laden with trees hung with Spanish moss, witness to the history of many generations. Its banks filled with wildflowers year after year like a fulfilled promise and the leaves on the trees along the banks turning gold to dust every fall.

At this time the Savannah River seems to be the best recipient and carrier of my memories and Tariq’s amanah (trust) back to the sea.

Thus after dawn on July 13, after Sehri and Fajr Salah just before the sun rises over the Savannah river at the Rapids, I will empty these bottles and return their contents to the sea.

Dust to dust, ashes to ashes and the sands and pebbles of faraway islands and seas back to them……….

please send up a prayer for the three boys and their families.

“Your children are not your children. They are the sons and daughters of Life’s longing for itself”
― Kahlil Gibran,