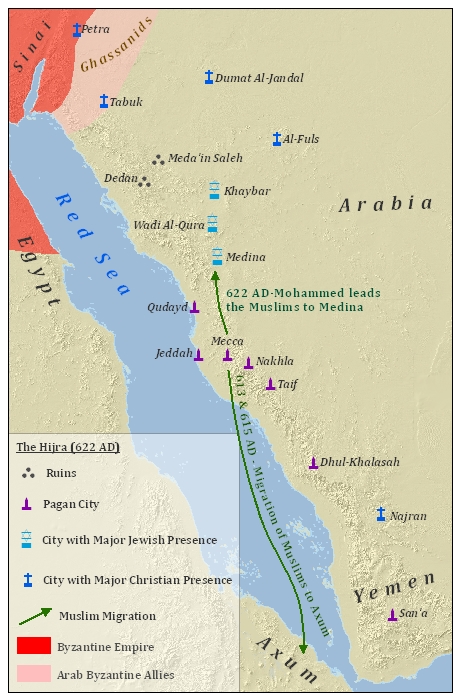 I am on the road to Jeddah from Mecca.  Unbeknownst to me I am carrying within me the Morse code embedded in the dust particles from the smithereens of the blasted buildings of old mecca.

Little do I know that I am carrying messages encoded in these particles meant for the Prophet pbuh who lies buried in his mosque in Medina.

The road to Jeddah is busy with traffic unlike the night of the first immigration.

When Prophet Muhammad pbuh declared the message of Allah in Mecca and forbade the pagans from worshipping a thousand Gods and punishing their women like beasts, the pagans turned on him and his handful of followers with a vengeance. In the town of Mecca where everyone knew everyone else and where the command of the pagan Quraish ruled the roost, it was difficult if not impossible to evade the ridicule, the name-calling and sometimes the outright physical violence perpetrated against the new Muslims.

It is the same today, when a man or a woman turns to Allah and accepts Him alone as his or her one God, his family, his society and his workplace not only shun him but place major impediments in his path such that makes his living in his own town socially, morally and financially unbearable.

It is in these circumstances whence one can no longer practice the belief of One God and obey his commands that the permission to migrate has been given.

It was such overbearing circumstances that brought the first immigrants of Islam on their feet walking the 53 miles from Mecca to Jeddah in search of ship to cross the Red Sea to Abyssinia.

The road from Mecca to Jeddah flies when one is in a car. However looking out of the window the harsh unforgiving landscape of a rocky terrain mixed with desert sand discourages any greenery to flourish. Few thorny bushes dot the path and the rest is unrelenting sand and rock all the way to Jeddah.

The immigrants, eleven men and four women trudged through the night, all from affluent and influential families leaving behind everything that connected them to their homes, their memories, their mementoes, their loved ones and there relationships in the town they grew up in and most of all their beloved Prophet Muhammad pbuh.

My heart is full, I am leaving Mecca yet I have an inner joy of anticipation as I am going to Medina, the city adopted by our beloved Prophet Muhammad pbuh who made it his home and now lies buried in the masjid he built.

I also have the additional reassurance at some level that I will return for a second ummrah before I finally leave Mecca for home.

The first immigrant in 613 had no such assurance, they wore what they owned and carried the meager rations that would get them to Jeddah to board a boat bound for what is now Port Sudan and then the land journey to get them to the heart of Ethiopia where the Christian King Negus had promised them asylum.

I reach Jeddah airport and am whisked into the flight to Medina and my heart and chest swells with happiness, and along with it I start coughing as if something or someone is trying to say something from within me.

The sun is slanting towards its decline as I reach Medina and the time of Asr is upon me silently but incessantly reminding me the moving hands of time.

I check into the hotel and walk out of the portals of the hotel that takes me through the shopping arcade, the path that will be mine for the next several days as I try to fulfill the promise to myself of praying 40 Salah in the masjid of the Prophet pbuh.

In order to focus on my ebadah I have turned down all the offers for ziarah (visitation) to other mosques.

It is Thursday and I am ready to start the focused ebadah that I have come for to the Prophets mosque. Yet at that time in my confident assurance I had no concept how challenging forty Salah can be even if all logistics have been facilitated. I am in a hotel that is a stone throw from the mosque, I have no obligations, structured program, schedules, tours, or any other people to distract me from my goal of the 40 Salah.

The first sign of what I had brought with me from Old Makkah came to me when I was in Maghreb Salah.  I felt my entire chest and breathing apparatus heaving to expel what was within me as I went into a spasmodic episode of unremitting cough.

Each fiber of my body ached as if my joints had been set free of their bondage to the bones. The only comfort was in the act of Salah. I remembered Prophet Muhammad pbuh telling Bilal to make the call for prayer by saying “ O Bilal give us comfort “ i.e. meaning call adhaan so we can make Salah. In the hours and days that followed the only comfort was in the masjid e Nabvi during Salah, All else became a struggle to get there in a state where I could worship.

After Maghreb Salah was the most precious time for me in the masjid. Despite the raging fever within me, and my breathing system rebelling to expel old Makkah from my lungs I was at peace. it was a time where I could recite the Quran while offering Salaat e Awaabeen, pray salat ul Istikharah and ask Allah the questions that have been lurking in my intellect, unresolved and some even not confronted yet.

The place in the masjid e Nabvi that choose me to perform my Salah’s was the first row after the wooden lattice partition that separates the women’s prayer area from the men. In front of me was a brass shelf laden with Qurans with translations in the major languages of Muslim countries including Chinese. Behind me was a shelf where I could place my shoes. I had bought a green musallah to give me focus and define where I was and what I was doing and to remain in one place rather than flit from one part of the masjed to another.

Between the Maghreb Salah and Isa Salah is a time when focus is beautiful, there is peace, connection, uncharted time the end of which will be announced by the isha adhaan, so there is timeless ebadah without a feeling of passage of time.

You enter into the nafila reciting from the Quran stationed on the bookcase and keep going till the isha adhaan is called. Your body and spirit is filled with lightness with every rakah performed and every word recited from the Quran.

With me were two women who became my silent companions in my vigil of 40 Salah. One probably from Iran or Syria who wore black and who was there everyday in the same place.  The other woman wore white and it was difficult to tell where she was from. They both flanked me on either side providing me the protection from distraction as we each prayed our own nawafil Salah and commuted with our Lord privately.

After Isha I felt the burgeoning of something weeping within me, wanting to be let out. As I exited into the cold air of the Madina night, I started coughing incessantly and kept on till I reached the hotel room and collapsed into feverish sleep.

Thus began my journey of bringing the weeping specks of old Mecca and laying them one by one at the feet of our beloved Prophet pbuh…………….