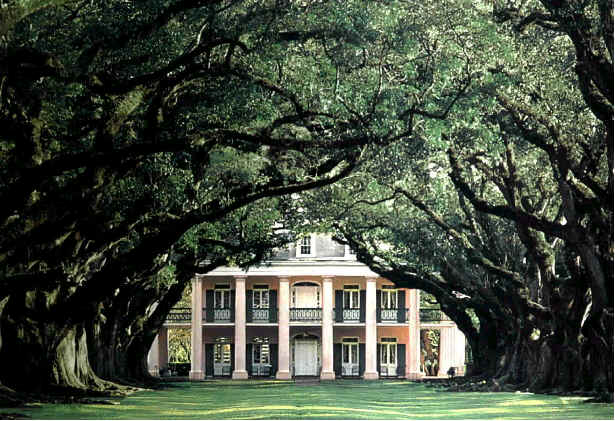 Baton Rouge unfolds in a quiet and graceful manner, just when you become cocky that you the know the way, the river meanders and beckons you to another, or the road ends in a bayou inviting you to stop and reflect on life…….

In the outskirts alongside the river are the Plantation houses. They are sentinels of memories of a time gone by. One can look at those times with nostalgia or with horror depending on which side of the economic and color blanket you were born on. 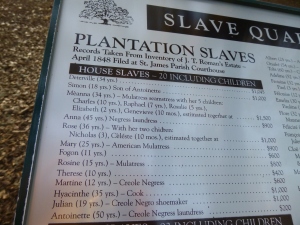 Outside are the slave cabins………I can only surmise from what I have read in novels or seen in movies. Imagination runs rampant. However only Allah Subhanawataala knows what happened in the sugar cane fields and why slaves were bought and sold like cattle.

I am reminded of a scene from “The slave Prince” when he runs away from Natchez, untill he reaches the shore and realizes as he makes his sajdah that………….his predicament is from Allah and that he has to make the best of this captivity with saber. He realizes that though he is a prince, but in this land he is just like all the other slaves……… and it is from Allah.

Baton Rouge has been a sanctuary for fleeing slaves in its swamps and complicated bayous where people can disappear. A few years ago it became a sanctuary for the people fleeing the onslaught of water………Tons of it as it invaded their homes and places of work and took away everything in its wake. 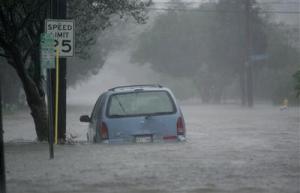 The words of a pediatric resident:

She watched from the hospital window in silent horror as the water rose relentlessly and unimpeded by anything in its path. She watched the water slap against her car, her white coat in her car rose in the water as it filled the car and her stethoscope floated out…………She was in the hospital on call for the pediatric ward. She stood there with the realization that she stood in everything she owned and despite being a resident physician she was penniless and homeless. The storm had just begun.

Katrina had come with full force, the manmade levees at New Orleans had bowed out to allow the water to even the field between the rich and the poor alike. She just out of medical school and starting her residency in New Orleans watched her only investment float away out of the parking lot as the water rose………

She arrived in Baton Rouge flown in by rescue helicopters to the Hospital, with a few more of the residents and some of the attendings. Everything she owned, valued or was attached to had disappeared into the vast ocean with no return. There was no one to empathize with her as she was the one who had to take care of the anguished refugees and their children driven by Katrina into the swamps of Louisiana.

History was repeating itself, but this time it was not the slaves who were seeking refuge in the swamps from their cruel and unrelenting slave masters but the men women of all colors from New Orleans fleeing the relentless swath of water that did not respect status, money, color or gender. Katrina was blind.

It was here in the quiet Bayous of Baton Rouge that the tiny gems in the Bible belt sparkled, emanating the light of generosity, compassion and ehsaan.

Dr. F a Muslim physician who had just joined the hospital in Baton Rouge opened her home to the physicians who were homeless and penniless and had no one to share their anguish. Even in this state of shock and loss they had to step out of their own personal anguish and care for others. They were the forgotten victims of Katrina that found sanctuary in Muslim homes of fellow physicians.

Baton Rouge housing was full to the gills. The medical residents were given tiny bunks in the Cruise ships at sea, escaping from the water they were put back afloat in the water unthinking of the effect it may have on them.

Silently and diligently they worked day and night, quietly and compassionately setting aside their personal anguish for later and delaying the uncertainty of the future.

Dr. F housed them in her home; giving them a semblance of the warmth of a home they had lost, with reassurance and affection understanding their underlying grief of loss. She worked alongside with them to take care of the deluge of people pouring into Baton Rouge from New Orleans.

She and her husband opened their hearts and homes to strangers, reassuring them with the innate optimism of the Muslim creed that all calamities and blessings are from Allah and that we must accept what he gives and work with what is present.

Wearing hijab in her own home, day and night, the smile in her face did not waver as she willingly compromising the privacy and family life of her home in service of her fellow humans in the true tradition of our beloved Prophet Muhammad pbuh.

Katrina went away and with her she took not only the physical belongings of people but for some she took their hope and mental health.

However she left behind the gems in the Bible Belt of Baton Rouge that to this day from their lone presence sparkle to beckon the weary and the forlorn not only from Katrina but all those who are exhausted from the curves life has thrown them, towards the gentle and optimistic Sunnah of Prophet Muhammad pbuh.

DUA: May Allah Subhanawataala shower them with His blessings as they silently, gracefully and thankfully seek His acceptance in the service of His creation.