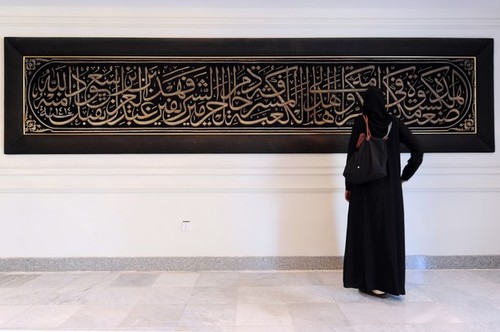 It is the eve of Ramadan and the Muslims in America are busy. The clamor and clatter of manmade things has reached an all-time high. The debate on TV regarding the economy tanking and the rhetoric from the two political parties has locked them in an inflexible game of “chicken”

In this environment of hostile division between the elephants and the donkeys, one would think the Muslims would have ”ibrat” learn a lesson and clean up their act.

Human nature is so base and so easily distractible that even the intelligentsia succumbs to the whisperings of the shaitaan who succeed in  arousing contempt and arrogance in the hearts of some children of Adam (AS). I hear the doors of Jannah slam shut, as the grains of arrogance become a molehill in the best of my brothers and sisters in Islam. I shudder and look to my left at my heart, which is holding its secrets close.

Where am I in all this turmoil?

I know that the economy will suffer because one reaps what one sows. One cannot sow fire and death in the neighborhood and expect the vegetable garden to bloom inspite of the smoke, heat and dying children nextdoor.

I avoid the blaring TV and radio and concentrate on hanging on to what is becoming a downward slide:

My inability to rise in the morning with freshness, to spend the hours before daybreak in remembering my Lord and my inability to be punctual.

As my neurology mentor said on his retirement “ With my retirement from being a Doctor I say goodbye to my life of apology: apologizing to my patients because I went home for dinner, to my wife because I left early to see the patients………..”

I too live a life of apology, but mine comes from overscheduling and from disregarding the need for “set up time” as explained by a Scandinavian physicist. For every action, or a project we need a set up time and take down time. Thus if we jam a lot of different projects in a day we must give leave for set up time for each which is where I fail, resulting in being unpunctual for my appointments and leading a life of apology from one appointment to the next.

While the Muslims argue with each other about Iftars, about the number of rakats in the taraweh, whether the youth should or should not go to an amusement park, or whether it is my way or the highway………… I pause in the blazing sun and the clear blue sky with the fluffy beautiful clouds and wish with intensity that my Lord would invite me to spend the last ten days of Ramadan at His house!

Have you ever desired with all of your being to be invited to someone’s house? This someone is our Lord Allah.

In front of His house barring us from entrance are human guards, airplanes, security officers, scanners that unclothe you without you removing your clothes, visas and people who decide who can get visas………..These are the modern day bandits that rob a pilgrim before he sets foot in the house of My Lord.

There are all man made impediments in front of His House.

I just wait……..and pray that if I am not allowed to go to His House, it would not be because He does not wish to invite me but perhaps some other failing of mine that precludes me from travel to His house.

I also ask Him that if I were the perfect Muslim, would I have this intense need to present myself like a beggar at his door?

Meanwhile, the TV blares, the radio nitters, the Muslims argue and……… I wait for my invitation!