THE NEUROLOGY OF FEAR AND RELIGIOUS PERSECUTION

Persecution of any sort is a dirty word in the United States of America. 65% of the current population has ancestors who fled their homelands because of religious persecution. 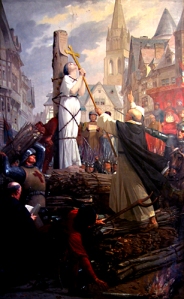 The most recent immigration in the past 50 years has been a brain drain from other countries of intellectuals or brilliant young people who came in search of excellence as students and were enticed to stay.

The people of each religion have their own personal story to tell regarding religious persecution. Ranging from the Spanish Inquisition to burning women as witches to having double religious standards, one for the monarchy and the rest for the subjects. These tribulations brought the ancestors of the current day Americans to the free new world.

It is unfortunate that for many reasons both the newest and also the oldest members of the immigrant population is experiencing religious persecution.

The Muslims came on to these shores with Christopher Columbus. A large population of the African Americans in the southeast has its roots in Muslims abducted from Muslim Africa.

Remnant of their attempts at salvaging their Muslim heritage are manifest in the oldest Christian church in Savannah, Georgia where they earned the possibility of freedom by making pews for the church. On some of the pews is inscribed “Allah o Akbar” in arabic.

How does this have any bearing to what is happening now to the Muslims of the world and of the United States?

When faced with a crisis, It is easy to point fingers at other people, other religions and find differences in ways of thinking and culture as a cause.

The muslim immigrants of the recent past as well as the founders of the nation (the african slaves) have enriched the melting pot  of the United States with unique talents and a pure islamic work ethic. This combination of multicultural multi-ethnic intelligentsia has propelled this country to become a leader in the world in many areas.

Why then are Muslims persecuted for being Muslims and their beliefs systems not only criticized but also are on the block for a brain transplant by coercion, fear or by force by some?

How can Americans agree with those who raise the hand or voice to persecute a group for the religion it practices? The answer is very simple, they are impelled by fear.

Here I will change hats and wear that of a neuroscientist. As long as one is emotionally secure and there is no real life threatening danger, the frontal lobes of the brain work to integrate information absorbed and process the information in a logical manner, thus before 911, information was processed in a logical, methodical and objective manner.

This has been the key to leadership and unimpeded development of higher institutions of learning in the United States. In the past, the security, human rights and civil rights of every human was protected though faces and superficial changes occurred every four years with elections.

Why haven’t the third world countries been able to prosper when the people from the very same countries come here and go to Harvard, Yale and UGA and do outstanding research and provide solutions to scientific and economic problems?

The answer is “FEAR” the presence or lack of it.

FEAR is an emotion that is like an internal termite, it eats away from the inside till nothing but the shell is left.

Once fear knocks on your door in a very real form for example in the form of 911 or in the form of the FBI coming to get you because you are a Muslim, then your brain goes into the temporal lobe processing. It is now processing very quickly and urgently at the level of FLIGHT OR FIGHT and you will see both examples of this in the aftermath of 911 and the IRAQ War.

The brain, once it is processing in the emotional or limbic mode, no longer integrates information obtained. It discounts everything except what it “feels” , which is fear. This is where the old ‘fears” come back also.

FEAR stops all progress in humanity and puts the mind and body into the FLIGHT OR FIGHT mode.

For the Muslims who have immigrated from countries with repressive regimes, old memories haunt and the body goes into the fright, fight and flight mode at the slightest hint of persecution.

For the Americans, Muslims and non-Muslims:  activating their limbic status with fear takes more time as these generations have grown up with security.

Despite what some of the media says, It is difficult to convince the young and even the middle-aged people in America that Muslims are “out to get them”, when they know, love and respect their muslim neighbors, friends and colleagues.

Thus millions of Americans from all walks of life, racial, ethnic and religious backgrounds have demonstrated both physically and electronically against the war and against religious persecution since the 911.

What will the people who are being religiously persecuted do? I don’t know.

1.    FLIGHT: They can immigrate out of the circle of persecution in the United States. Do they have another free world to immigrate to? It has been reported that 60,000 Muslims are in camps waiting to be admitted to Canada, and thousands have gone to Mexico. Will they find safety there? Many have gone back to their home countries and are being persecuted there, or have been extradited back to the US.

2.    FIGHT: is the next choice offered by the limbic part of the brain. This format is reflected in the anti war protesters who lay down in the streets in front of cars, who are beaten by police and many are in jail. What is the next level of fight is yet to be seen.

HOW DO MOMIN MUSLIMS DEFY THE LIMBIC BEHAVIOR: There are very few reports in Muslim history of a knee jerk response of Muslims fighting back or hurting the people who are persecuting them. It is only when they are pushed to the extreme limits (e.g. Saladin only attacked Jerusalem when the Christian Kings governing Jerusalem, threatened to attack the Kaaba, which is the House of Allah) that they fight back.

What is the reason? Are they so afraid that their fear paralyzes them, or are they turning the other cheek?

In studying the behavior of Momin Muslims neuroscientifically, it appears that they prevent their brain from being overcome by fear of all else except the wrath of Allah.

They prevent their brain from being overcome by fear and being turned over to the limbic system by a very interesting method.

They submit to Allah, thus laying all their fears at His door, and they accept each happening as His Will and their Qadr. They are neither weak nor afraid, but accepting of what Allah has doled out to them.

In their efforts to outlast the agonies of the pain of persecution, they turn to Him for help. At a higher cognitive level they understand and accept that what may be happening to them may be their Qadr and if so they may just have to bear with it till the time comes and “the help of Allah arrives”, or they succumb to it while remaining ‘Sabir’ and in complete submission to Allah, thus leaving their final fate and outcome to Him and His justice.

How does this work at the neurological level?

This level of control of the limbic system can only be attained by subjugating it to the “humanized” brain. The humanized brain is a developmental phenomenon which the Momin develops by practicing his submission to Allah on a regular and consistent basis.

The humanized brain processes information in the light of the Quran and Sunnah and modifies behavior.  It deduces from facts supplied and matches them against probabilities based on the immediate outcome and that in the Hereafter. Momins choose the outcome that is best in the Hereafter, no matter how bad it may be in dunya.

Momin Muslims who have faith in God, struggle for justice and know that the promise of Allah is that justice will be meted out, if not now then on the Day of Judgment.

Which of the Muslims are Momin? There is no test for that, eventhough the guidelines for becoming a Momin are replete in the Quran and in the example of the Sunnah.

The final outcome of who lived life as a Momin remains a mystery that will be unveiled by Allah Subhanawataala Himself when He deems fit.

Are you more fearful now than pre 911?

10 thoughts on “THE NEUROLOGY OF FEAR AND RELIGIOUS PERSECUTION”