In the end it is the love of her child that breaks the heart and valor of a courageous woman…….
I am walking along the colonnaded street in Palmyra, starting at the victory gate. My soft-spoken guide begins the story of Palmyra…..Once upon a time there was an intelligent beautiful and ambitious woman, who had great ambitions for her homeland. She meets and marries a man equally young and ambitious, both commoners by ancestry but well liked by the populace.
Together they build a magnificently beautiful city on the crossroads to the main trade route between the East and West.
They have one son whom they name “wa Hub e Illaat” or gift of Illaat. Illaat being a senior God of the populace.

Her husband the warrior king falls in the battle and she makes her son named “the gift of the Gods (Illaat)” the new king while she serves as his adviser as he is quite tender in age.
She then sets out to expand her land and brings more trade and prosperity to all. She remains independent and is answerable to none of the surrounding empires.
Faraway this expansion and prosperity arouses anger in the halls of the Emperor of Rome. He sends his armies to vanquish the rule of the child king and his mother.
Queen Xenobia flees with her son, but…….in this battle her son “ the gift of God” is killed………….
Normally I would go on listening to the story but I lose the thread…..the story in between the lines is much more poignant to me than the overt historical facts.

Standing in this desert with the ruins of this once prosperous civilization listening to the loss of a mother of her young son……which changed the tide of history for this place forever….touches me in the innermost sanctums of my heart.
My guide continues in his soft measured English “…….and she is bent down” and captured and imprisoned by the Romans.
I guess he means bent down under the weight of grief. When all the world becomes meaningless…….I know what he means, we build so much in this world for our children, without the knowledge that these are castles on sand or I should say cities on sand that are meaningless without our loved ones.
The gift of Allaat had to be returned to his Creator…..to whom he actually belonged.
inna lil lahe wa inna elayhe rajaown.

It from God we come and to Him we shall return

The story contines…..Caught in the well of her grief she is captured and imprisoned by the Romans, and remains alive for many years…………….. imprisoned by her grief internally and by the walls of the Roman prison externally…………and so is the story of Queen Xenobia mother of wa hub e Illaat.
An intelligent beautiful contemporary of Cleopatra. An equal partner in governing this city with her husband and the grieving imprisoned mother of her son.

Our walk ends at a point where I can see the valley of the dead……Everything begins and ends here. 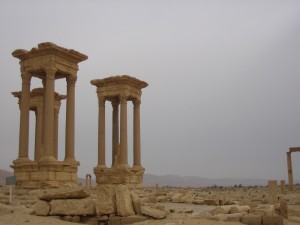