CHARACTER OF THE PHYSICIAN

Dedicated to all my physician friends and family. 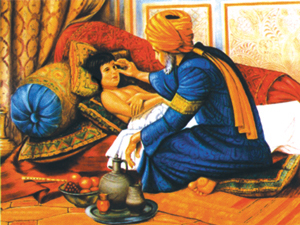 The physician should be amongst those who believe in God, fulfill His rights, and are aware of His greatness. Obedient to His orders, refraining from His prohibitions, and observing Him in secret and in public.

The physician should be endowed with wisdom and graceful admonition and should be, cheery not dispiriting, and smiling not frowning, loving and not hateful, tolerant and not edgy. He should never succumb to a grudge or fall short of clemency. He should be an instrument of God’s justice, forgiveness and not punishment, coverage and not exposure.

The physician should be so tranquil as never to be rash even when he is right. Chaste of words even when joking. Tame of voice and not noisy or loud, neat and trim and not shabby or unkempt. Conducive of trust and inspiring of respect. Well mannered in his dealings with the poor or rich, modest or great. In perfect control of his composure, and never compromising his dignity, however modest and forbearing.

The physician should firmly know that God only can award ‘life’ and that ‘Death’ is the conclusion of one life and the beginning of another. Death is a solid truth, and it is the end of all but God. In his profession the physician is a soldier for “Life” only defending and preserving it to the best of his/her ability.

The Physician should offer the good example by caring for his/her own health. It is not befitting that the physician does not observe his/her “dos” and “don’ts”.

The Physician should not turn away from the lessons of medical progress. The physician will never convince his patients unless they see the evidence of his/her own conviction. God addresses us in the “Quran” by saying, “and make not your own hands throw you into destruction”. “The Prophet says” Your body has a right on you”, and the known dictum in Islam is “Do no harm”

The Physician is truthful whenever he/she speaks, writes or gives testimony. He/she should be invincible to the dictates of creed, greed. Friendship or authority pressurizing him to make a statement or testimony that he knows it false. Testimony is a grave responsibility in Islam.
The Prophet once asked his companions. “Shall I tell you about the gravest sins?” When they said yes, he said “claiming partners with God, being undutiful to one’s parents. “And, after a short pause he repeatedly said “and indeed the giving of false talk or false testimony.”

The Physician should be in possession of basic knowledge of jurisprudence, worship and essentials of Fiqh enabling him to give counsel to patient seeking his guidance about health and bodily conditions in relationship to the rites of worship. Men and women are subject to symptoms; ailments or biological situations like pregnancy and may wish to know the religious ruling pertaining to prayer, fasting, pilgrimage, family planning, etc.

Although ‘necessity overrides prohibition’ the Muslim Physician-nevertheless-should spare no effort in avoiding the recourse to medicines or ways of therapy be they surgical, medical or behavioral that are prohibited by Islam.

The role of Physician is that of a catalyst through whom God, the Creator, works to preserve life and health. He is merely an instrument of God in alleviating people’s illness. For being so designated the physician should be grateful and forever seeking God’s help. He/she should be modest, free from arrogance and pride and never fall into boasting or hint at self-glorification through speech, writing or direct or subtle advertisement.

The Physician should strive to keep abreast of scientific progress and innovation. His zeal or complacency and knowledge or ignorance, directly affects the health and well being of his patients. Responsibility for others should limit his/her freedom to expend his/her time. As the poor and needy have a recognized right in the money of the capable, so the patients own a share of the Doctor’s time spent in study and in following the progress of medicine.

The physician should also know that the pursuit of knowledge has a double indication in Islam. Apart from the applied therapeutic aspect, pursuit of knowledge is in itself worship, according to the Quranic guidance, “And say. My Lord, advance me in knowledge” and “Among His worshippers, the learned fear Him most”. “God will raise up the ranks of those of you who believed and those who have been given knowledge.”

Would you like to add to the persona of the ideal muslim physician?