LOVE AND SOLACE IN THE PROPHET’S MOSQUE 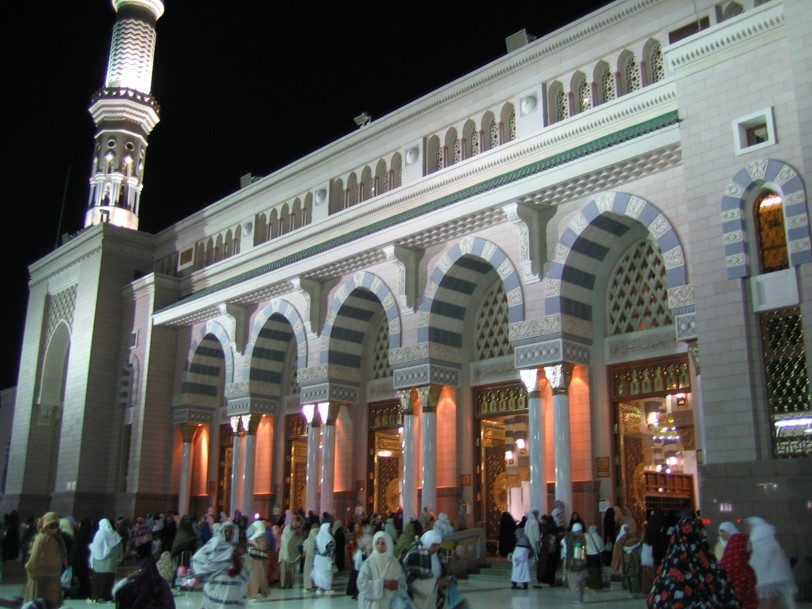 First we went to Medina. There, on the third day, I met myself.
She was about my age. It was time for Asr, Shireen and I were walking towards the Masjid e Nabvi, Shireen wanted to pray in the courtyard as it was sunny and beautiful, I wanted to pray inside as we were going to stay till isha, and I knew it would be cool later towards the evening.

As we approached the entrance into the mosque, the Lady guard dressed in a flowing black abaya her hands sheathed with thin black gloves, her face hidden behind a black niqaab, her large dark eyes glinting, stopped me at the door and checked my backpack, and said “Camera!” and sent me packing with a slight push away from the entrance. I had forgotten to remove the camera from my backpack, even though due to my earlier experience (detailed elsewhere) I knew that cameras were forbidden at the Prophets mosque,

We turned around and sought a place in the mosque courtyard, which was rapidly filling up. I saw a Pakistani woman sitting on one of those three-legged stools with an empty space beside her. I asked her if I could pray there. She looked at me and I could feel the anger, the disgust and the reluctance in her eyes, and yet she said “yes” I sat down beside her and read my dua book while waiting for the adhan. She sat beside me and made no effort to talk, or connect or smile. I could feel the resentment emanate in layers from her. Finally, the adhan started.

The sweet sound of the Muezzin rolled out an invitation to pray in the Prophets mosque. I felt the love of our Prophet (Peace be upon him) enveloping me. And as the “Allah O Akbar” came from the muezzin, an answering adhan came from far away. I looked around and saw the mountains encircling the mosque.

It was surreal; The Mountains were echoing the muezzin’s word for word, along with all the Muslims. We felt safe, secure and loved in the courtyard of the Prophets mosque, after all he had walked here and prayed here, and his love, his compassion and his gentleness lingered on.

We prayed our sunnahs and soon the iqama was called and the fard prayer started. At its conclusion I sat back down in my place and tried to be polite with the lady next to me by asking where she was from and how long she had been in Medina. She looked at me and her eyes struck me as “weeraan” or devoid of hope and happiness, I guess desolate would be one translation of the word. The expression in those eyes was familiar I had seen it elsewhere, but I could not recall where.
She proceeded to tell me that she was supposed to come for Hajj last year but there were complications. She did not need much prompting, to talk even though the tone of her voice was a monotone and on occasion businesslike and detached. She recounted her story reluctantly. And as the story unfolded, I was speechless.

She had lost her 14-year-old son in a car accident last year (2005). He was survived by his sister who was two years older than him and was sitting on the other side of her mother and listening quietly.

This lady in addition to her son’s accident had developed severe back pain and had to operated upon and thus could not come for Hajj. It was for this reason that though she could pray on the floor, she could not sit on the floor for long periods of time.

Tears rolled down her cheeks as she recounted her story in silent desperation. The people and sounds around me receded, as I listened and felt her grief. Here was someone who had also lost her Tariq, and yet I could only feel her pain but provide no solace. The Prophets mosque, stood silent, the floor cool and comforting, the minarets silent and upright, all a witness to her pain and mine.

The sun slowly descended and the warmth of the early afternoon turned to the coolness of pre-maghrib. She repeatedly though hesitantly reminded me and seem to be reminding herself that she had lost her son. I told her that I also had lost my son last year in a car accident. She seemed to go on as if I had not said a word. She said again quietly that she had lost her son, and only God knew why.

Finally it seemed as if what I had said registered and she turned and looked at me and said:” how old was your son” I told her that he was nineteen. Her face remained desperate, she gave me her condolences, and I tried to give her mine. Two mothers fumbling with words and emotions to comfort each other where our Prophet had been comforted in the arms of the Ansar.

To my amazement the young girl sitting next to her mother turned to me and said “ Aunty we are all sent to this world for a finite time, and when our time is up Allah takes us back, Aunty if you make dua it will help you, as only God knows why and when things happen and we have to accept his “masheeat” as he is all knowing and all powerful”. I looked at her. She was a young innocent girl from Pakistan; she couldn’t have been a day older than sixteen. Words of solace came tumbling out of her mouth enveloping us in a blanket of comfort.

The good Lord was sending solace to two mothers in the courtyard of the Mosque of his beloved Prophet, the sun was setting the sky was red and purple, the adhaan for Maghrib was being called and being repeated by the mountains, the cloak of our beloved Prophet was being placed on the shoulders of two mothers and two sisters who were struggling with the loneliness of having lost the sunshine in their lives, their laughing lighthearted sons and brothers were gone.

She turned to me and said “you are very fortunate, it is going to be Hajj-e- Akbar” and I remembered where I had seen that “weeraan” (desolate) expression before ………it had been in the mirror.

3 thoughts on “LOVE AND SOLACE IN THE PROPHET’S MOSQUE”